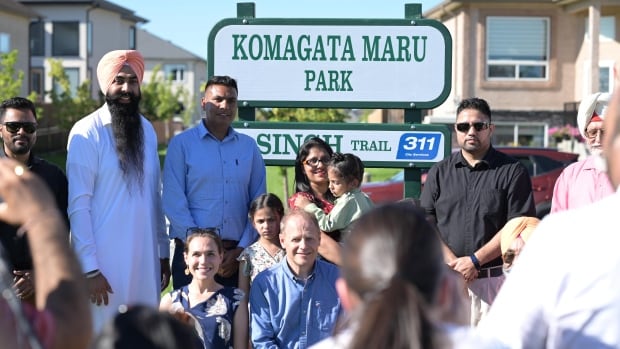 Residents of the Inkster Park area celebrated a long-awaited milestone on Saturday – with an important part of their shared history officially celebrated in Winnipeg.

The public green space along the Singh Trail was officially renamed from Singh Trail Park to Komagata Maru Park, just over a year after several residents protested the Manitoba legislature’s lack of commitment to develop the park. .

In the intervening months, residents and supporters lobbied City Hall to officially rename the park. Council voted unanimously to do so on April 28.

About 75 people, including politicians from all levels of government, gathered to mark the occasion, unveil a new emblem and celebrate with prayers, food and bhangra music.

“It’s definitely a happy day,” Gurjit Kaur said. Kaur is one of several community advocates who worked to get the park renamed – and will continue to work for amenities such as play structures, lighting and historical markers detailing the details behind the Komagata Maru incident. .

In 1914, a demonstration of intolerance led the government of the day to turn away a ship from Vancouver carrying hundreds of South Asian immigrants, most of them Sikhs.

Almost all 376 passengers were denied entry and the ship sat in port for two months. Eventually he was forced to return to India and was met by British troops. After the riot, twenty passengers were killed and others were sent to jail.

The incident has deep significance for the Sikh community and led Prime Minister Justin Trudeau to formally apologize for Canada’s role in it in the House of Commons in 2016.

On Saturday, Liberal MP Kevin Lamoureux said an apology was “something that was long overdue” and that renaming the park would help ensure what happened was not forgotten.

“The Komagata Maru incident – this should be an educational opportunity for all of us to really appreciate,” he said. “For today, let’s just celebrate the unveiling of a very special park.”

Cover said the city officially naming the park was an important step because it could now allow residents to explore fundraising opportunities to help expand the facilities.

Count Vivian Santos (Point Douglas) hosted the event, and was credited with helping residents get through the process of requesting a name change.

In a statement released before the ceremony, Santos thanked the people of the area for their patience.

“Renaming this public green space is the first initial step in our collective efforts to continue building a beautiful and memorable park that honors and values ​​the tragic event that took place,” he said.