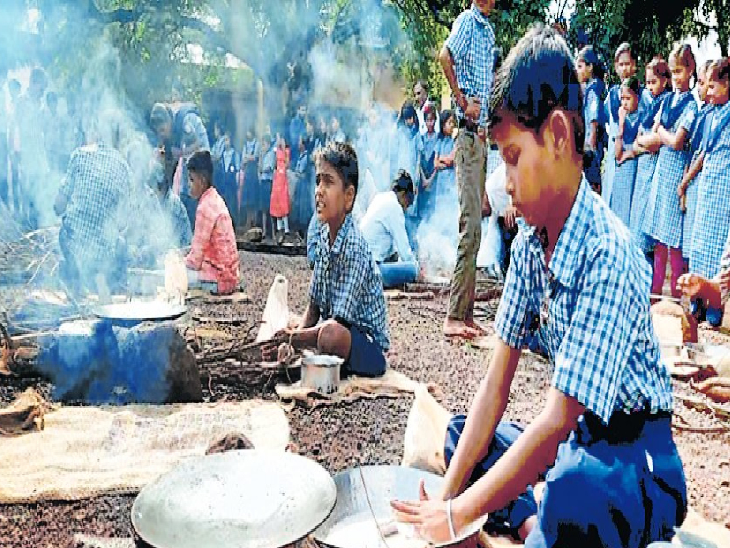 There is currently a debate on whether rural teachers live at headquarters or not. Wherever the teachers are, if they are making ‘creative’ efforts to make the students feel attached to education, school, working hard to increase the marks and at the same time taking initiative to inculcate the sense of equality among the students, then the students of such teachers are truly the future of tomorrow. About a unique experiment of Bhaktaraj Garje, an enterprising teacher from Jat taluka of Sangli district…

In today’s world and especially in the 21st century, women are getting equal opportunities. However, the responsibility of ‘hearth and child’ rests with the women. Men do not have much connection with Chuli. And especially making bread is impossible. Now the self-reliance lesson of giving ‘my bread’ to the children is being taught in the primary school of Kalalwadi in Jat taluka. The hardworking community of this drought-stricken area of ​​Jat taluka goes to live hundreds of miles away from their village for six to seven months of sugarcane harvesting. During this time, the elderly and children of the house have a shortage of food. It is seen that this initiative started by this school is commendable. This initiative has been noticed by the global media.

In order to bring equality between boys and girls in the Zilla Parishad Primary Marathi School of Kulalawadi (Taluka Jat) of Sangli district, and to destroy the notion that only women are related to Chuli, the initiative ‘Mazi Bhakri’ was conceived by teacher Bhaktaraj Garje to teach the students of the school a lesson of self-reliance. 182 students took bread making lessons from it. Many students even surprised many by making good bread in their first attempt. Along with this, you will be able to taste the taste of self-made bread on a hot griddle at the time when the children of your family go out for sugarcane. Faces lit up in this happiness were also seen.

Bahinabai Choudhary, the best poetess of Maharashtra, in her Ahirani language, made us aware of the duty and responsibility of the world through the line ‘O Sansar…Sansar…Jasa Tawa Chulhya Yavar…Achih Taala Chatke…Theva Mahti Bhakar’. Until today, mainly the women classes had to suckle their hands to fill their stomachs twice a day. Men could not even have a simple idea of ​​this. But now when a new society is being formed, the awareness that this responsibility is not of the women class alone but of the whole family is being shown through this scheme ‘Majhi Bhakar’.

Jat taluka is known as the permanent drought area of ​​Sangli district. A large ‘migration’ is taking place from this area. There is agriculture, there is strength to work hard, but due to Baliraja’s constant displeasure, the Baliraja of this region has to camp in many districts not only in the state but also in Karnataka for sugarcane cutting labour. You have to spend the remaining six months of your life with the money earned during this period. Keeping in mind the fact that children’s education and food were in dire need during this period, teacher Bhaktaraj Garje decided to go beyond the scope of education and implement this innovative initiative keeping in mind the obstacles of the students in his area. The pass number of this school was only 80 a few years ago. Due to his various activities, this number has now reached 240. Their ambition is to prevent 100 percent child migration through this initiative. Speaking to ‘Divya Marathi’, Teacher Garje also expressed his opinion that at a time when their children can cook at home, their parents can keep them in their homes for education and they can safely go to work.

Since 2016, a bread making competition has been started for school students. Students are trained to make bread by bringing materials such as flour, tawa, kathvat, jalan etc. from their home and setting up a three-stone hearth on the school grounds. Then they are explained what are the criteria for the shape and taste of this bread. Due to this initiative of the school, out of 240 students of the school, 182 students have become proficient in making bread. Birudev Tambe, a student of the school, said that I enjoy making bread in school. My mother comes home after cleaning and cooks again. I have experienced how hard she has to work. He also expressed his confidence that after the sugarcane season starts next November, after my parents move out, I and my elder brother, who is studying in my school, will now cook and run the house by ourselves. Due to this initiative of the school, the students of the rural areas are also getting the sense of equality now.

GONE BUT NOT FORGOTTEN: Dozens gather in Saskatoon to honor the lives of the MMIWG.GTN News

Crime: Is this a real son.. Crushing his father on the road..GTN News