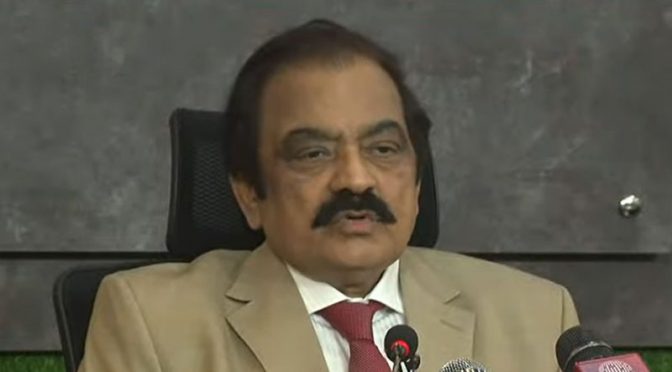 Islamabad: (Web Desk) Interior Minister Rana Sanaullah said that the Prime Minister will deliver in the next 4 to 6 months, if the caretaker government comes, the country will default.
In an interview on private television, he said that if the army remains limited to its constitutional role in the future, then there will be no uncertainty.
He said the PTI has dissolved the assemblies of Punjab and Khyber Pakhtunkhwa and will hold elections soon. Governor Punjab may ask the Chief Minister to take a vote of confidence.
The interior minister said that if Imran Khan dissolves the assemblies, we will hold by-elections in 60 days, but when he brings the serfs to dissolve the assemblies, not all the serfs will come.
He said that the Governor has the authority to ask the Chief Minister to take a vote of confidence, it is better to ask the Chief Minister to take a vote of confidence than not to distrust Punjab.
Ranathnaullah said that there is no obstacle for the return of Nawaz Sharif, but Nawaz Sharif should not come to Pakistan much before the elections.
He said no one will be happy with the government when electricity bills of 16,000 come. If gasoline and the dollar go down, the elections will go well.
The interior minister said that there was a person who attacked Imran Khan, according to us, Imran Khan was hit by a bullet, 2 shots from the top of the container, one of which hit Moazzam.